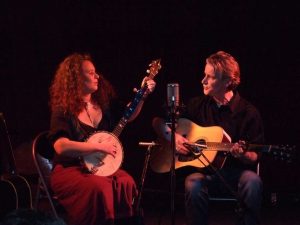 Highly regarded in the Australian acoustic music scene for their vocal abilities, songwriting and musicianship, partners Ruth Hazleton (Vocals/Banjo/Guitar) and Bill Jackson (Vocals/Guitar/Harmonica) first joined forces in 2007. Individually and as a duo they have toured the UK, Ireland and the US and have recorded and released more than a dozen albums to wide critical acclaim internationally – Ruth as part of seminal Australian folk duo, Kate Burke & Ruth Hazleton and Bill as a solo performer. The duo presents a combination of original songs and traditional songs from the Americana and folk music traditions