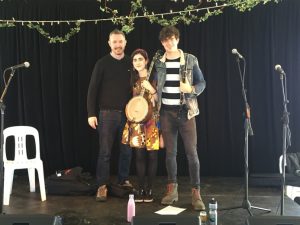 Maggie Carty, banjo player and singer from the West of Ireland moved to Australia in 2017 and has been performing widely here at festivals including Port Fairy Folk Festival, National Folk Festival, National Celtic Festival, Illawarra Folk Festival and venues across VIC and NSW. Now Melbourne based she has joined forces with Máirtín Staunton (Flute/Vocals), Ado Barker (Fiddle), Gerry McKeague (Guitar, Vocals) and Thomas Botting (Double Bass) to form the Maggie Carty band. The group perform a mix of traditional Irish tunes and folk song with three-part harmonies and jazz undertones. On stage the group have a natural ease with each other, and their enjoyment and sense of fun is palpable and infectious!