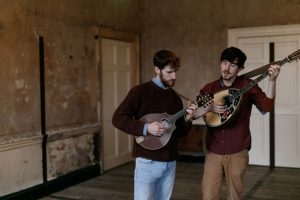 Brothers Brían and Diarmuid Mac Gloinn grew up playing music together around their hometown of Carlow, a small town in the southeast of Ireland. After moving to Dublin in 2012, they quickly became a staple of the live music and session scene in Ireland, playing their own original songs as well as folk songs from Ireland, Scotland, England. Their new album, the Hare’s Lament is being compared to the exquisite harmonies and musical intricacies of the legendary Planxty.