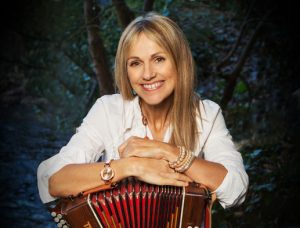 We don’t have enough space to list the achievements of Sharon Shannon, the button accordion player from Co Clare, Ireland. She has recorded and toured with a who’s who of the Irish and global music industry, including Bono, Adam Clayton, Sinead O’Connor, Jackson Browne, John Prine, Steve Earle, The RTE Concert Orchestra, The Chieftains, The Waterboys, Willie Nelson, Nigel Kennedy, Alison Krauss and Shane McGowan. Her 12 studio recorded albums to date have all been very different and groundbreaking, mixing traditional Irish with reggae, country, First Nation American, bluegrass, rap, dance, African, French Canadian. The genre-defying star has had multi-platinum album sales and has had several Number One albums, singles and DVDs in her home country. Sharon grew up in a rural community and is part of a family that all play musical instruments and traditional Irish music. However, her career took a massive upward trajectory when in the late 80s she was asked to join the seminal rock band The Waterboys. Her first show with that band, to an audience of 50,000, was the on main stage at perhaps the most well-known music festival on earth–Glastonbury. Here for the first time, in one concert, at Cobargo.