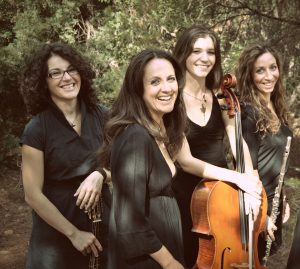 This all-woman band from Greece, Púrpura took their name from the Latin word for “purple”, a colour that is the symbol of spirituality, of mystery and of nostalgia for a time when people’s differences were not a cause of division and pain. Púrpura perform songs from the discography of band leader Chrysoula Kechagioglou, as well as traditional and modern songs from different countries, including Greece, Argentina, Portugal, Armenia, and Italy. Chrysoula K. & Púrpura combine elements of tradition with classical forms creating a new sound that is real, nostalgic, vivid, playful and airy. They combine the traditional lute, with the classical flute and cello.